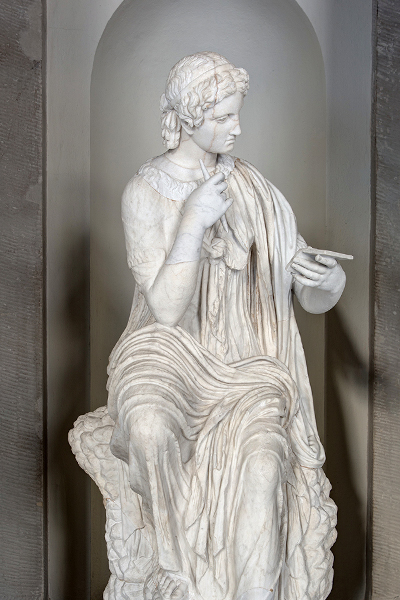 Calliope, Muse of epic poetry, the lengthy narrative poems. Her attributes are the stylus – a writing implement – and a tabula – a tablet. However, these attributes are modern additions to the sculpture.

Originally this statue represented Isis, a famous Egyptian goddess in Greek and Roman times. We know this because Isis was always depicted with her hair down – which was in that time a sign of a woman’s grief. Isis was mourning her dead husband Osiris. Look closely and you can still see wisps of hair like a necklace around this statue’s neck.

The statue’s head was also originally a male head, but thanks to a reworked hairdo, her attributes and her place in line with the other Muses, the statue has now become Calliope.

A VIRTUAL TOUR 360°
Experience the Larger Stone Gallery at the Museum of Antiquities in 360° here at the web site.

This archive shows nine of the sculptures on show at Gustav III's Museum of Antiquities, the Royal Palace. Many more are on display in the museum. Gustav III purchased several of the museum's sculptures during a journey to Italy at the end of the 1700s.