The current church has three naves but originally had two, with the south side aisle having been added in the mid-15th century.

The Riddarholmen Church was built in conjunction with King Magnus Ladulås's founding of the Franciscan Monastery in Stockholm in 1270 and was completed in circa 1300.

Today, the church has three naves but originally it had two. It was not until the 1400s that south nave was built.

The floor of the church was originally paved with cobble stones but today is made up of grave slabs from different epochs.

A burial and memorial church

Since 1807 the church has functioned solely as a burial and memorial church and regular mass is not performed here. The church is primarily known as the final resting place of the Swedish kings.

The first king to be buried here was Magnus Ladulås (died 1290). He rests in the chancel in front of the alter to the left and at his right side lies Karl Knutsson Bonde (died 1470).

The mausoleums were built in 1573 and 1574 by Johan III. The kings' original graves are situated under the mausoleums. If one stands facing the alter one can see the Gustavian chapel built 1629–1643.

Across from the Gustavian chapel is the Karolinska chapel, built 1671-1743. Karl XII (died 1718) rests in a black marble sarcophagus.

By the left and respectively right walls stand the sarcophaguses of Fredrik I (died 1751) and Ulrika Eleonora the Younger (died 1741).

In the Karolinska crypt, which is situated under the Karolinska chapel, rests Karl X Gustav (died 1660) and Hedvig Eleonora (died 1715), Karl XI (died 1697) and Ulrica Eleonora the Elder (died 1693) as well as five of their children who died in infancy.

The Bernadotte chapel, built 1858–1860, is situated on the same side of the church as the Gustavian chapel. The dynasty's earliest ancestor, Karl XIV Johan (died 1844), rests in a stately sarcophagus of Älvedalen porphyry.

In front of him lies Queen Desideria (died 1860) in a sarcophagus of green marble from Kolmården. By the walls stand brown limestone sarcophaguses for other Bernadotte dynasty regents.

The last monarch to be buried in the Riddarholm Church was Gustaf V (died 1950).

Read more about the Bernadotte Chapel

The Royal graveyard at Haga

Gustaf VI Adolf (died 1973) and both of his consorts Crown Princess Margareta (died 1920) and Queen Louise (died 1965) were buried at the Royal graveyard at Haga.

As the custom of burying members of royalty at Haga continued a Christian tradition was adopted and a new royal tradition was cultivated.

The seraphim shields that belong to the Royal Family members buried at Haga are now gathered on a wall at the Ridderholm Church.

The Haga Wall, as it is called, is situated close to the Bernadotte chapel. Crown Princess Margareta's shield on the Haga Wall is unique amongst the church's shields.

It is not a seraphim shield. Instead of the Order of the Seraphim's chain of angels and crosses around her coat of arms is a heraldic garland of marguerites.

Inspiration for the relief above came to sculptor Liss Eriksson from the Order of the Seraphim's world of symbolism - Dante's Divine Comedy.

It depicts the scene where Dante and Beatrice reach the ninth heaven, governed by the Seraphim, the holiest of all choirs of angels.

In Beatrice's beautiful eyes, Dante sees the reflection of light – a point of eternal light – the Holy Spirit.

The coat of arms in Riddarholmen Church

A Knight or Member should submit proposals regarding his Seraphim arms and a motto to the armorial painter to the Royal Orders.

On the death of a Knight or Member of the Order, his (her) coat of arms will be mounted in Riddarholmen Church on the occasion of the funeral of the deceased Knight or Member.

The bell is tolled at Riddarholmen Church on the occasion of the funeral of a deceased Knight or Member. 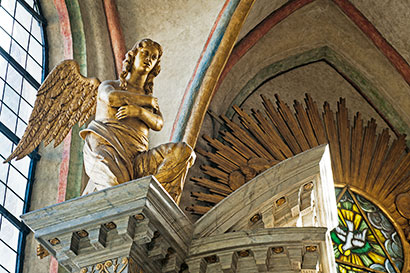 Angel in the Riddarholm Church. 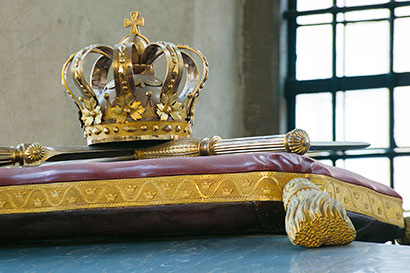 The Riddarholm Church is the final resting place of the Swedish kings. 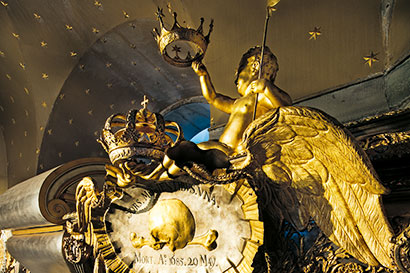 Prince Ulrik in the Karolinska Chapel. 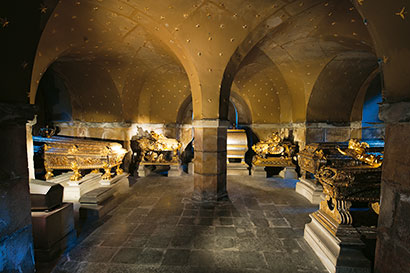 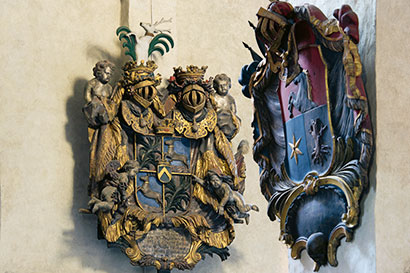 The standard of diplomat and Master of Ordnance Per Larsson Sparre. 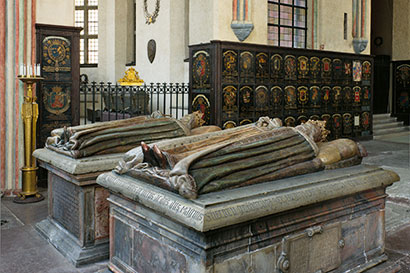 The tombs of Karl Knutsson Bonde and Magnus Ladulås from 1574 stand in front of the altar.

For large groups we recommend a pre-booked guided tour. The tours can be given in Swedish or English.

Discover more at The Riddarholmen Church

The current church has three naves but originally had two, with the south side aisle having been added in the mid-15th century.

In 1858–60 this chapel was built for the present royal dynasty of Sweden, the Bernadotte family.

With the exception of Queen Kristina, all the Swedish monarchs from King Gustav II Adolf to King Gustaf V have been laid to rest in the R...

Find out about the living history of heraldry in the sacristy at the Riddarholm Church. Since 1748, the Coat of arms of Seraphim Knights ...

The royal burial church at Riddarholmen also houses the Coats of arms of deceased Seraphim Knights. The deceased Knight is honoured with ...