Rosersberg got its name from the mother of the estate’s founder, Lord High Treasurer Gabriel Bengtsson Oxenstierna. His mother was descended from the prestigious Tre Rosor (Three Roses) family.

Construction of the palace began in 1634 and was completed four years later. The Oxenstierna palace was typical for its time, with a tall-roofed main building and grand, richly decorated gables in the German-Dutch Renaissance style. The building also includes a large courtyard, bordered by three low-rise wings.

In the second half of the 17th century, the Renaissance palace was considered dated, and the Lord High Treasurer's son, Chancery President Bengt Oxenstierna, had the palace radically modernised in the current Baroque style of the time.

For this he engaged the country's leading architect, Nicodemus Tessin the Younger. New wings were added and fitted out with garden grottoes, which have survived to the present day.

The tall Renaissance gables of the main building were demolished and the building was given a hipped roof. A splendid colonnaded gallery survives from that time.

In 1747, Rosersberg was acquired by Baron Erland Broman, and was again greatly modernised. These alterations were likely overseen by one of the country's most prominent 18th century architects, Jean Eric Rehn.

After Broman's death in 1757, the property was acquired by the State and placed at the disposal of the young Duke Karl of Södermanland (later King Karl XIII). This is how Rosersberg became a royal residence.

Duke Karl continued the process of comprehensive modernisation and new interior design, still under Rehn's direction. On the death of his brother Gustav III in 1792, Karl became Regent for the young King Gustav IV Adolf.

At the end of the 1790s the Palace acquired a number of important new interiors, typified by the Orange and Red Drawing Rooms and the Hogland Room. 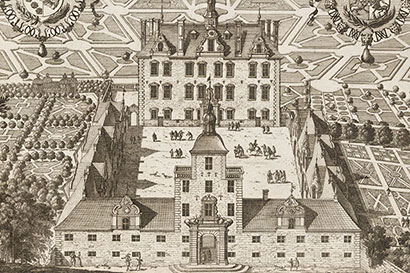 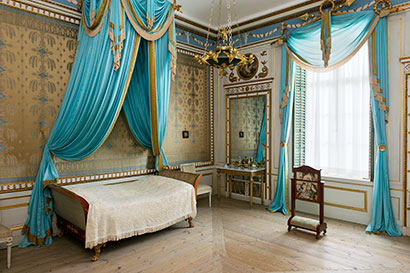 Karl XIII’s study. The palace was first purchased by Baron Erland Broman. After his death in 1757, the young Duke Karl (XIII) took over the palace. Photo: Alexis Daflos//Royalpalaces.se

The Red Drawing Room, Orange Drawing Room and the Hogland Room are typical examples of the palace’s new interiors from the 1790s. Photo: Håkan Lind//Royalpalaces.se

Follow along on a guided tour and hear about the palace’s royal history, the history of the building itself and the preserved furnishings.

Visiting Rosersberg Palace is like stepping back into an authentic royal environment from the turn of the 19th century. The fittings have...

The palace chapel at Rosersberg Palace is located in the southeast wing of the building, and is particularly rich in history. The chapel ...

West of the palace, towards Sigtuna Bay, is the English-style park laid out by Duke Karl (XIII). Other nearby sights include Sweden's lar...

The Juno Wing and the terrace at Tullgarn Palace are home to a summer café serving sandwiches, coffee, pastries, cakes and ice creams.

Rosersberg got its name from the mother of the estate’s founder, Lord High Treasurer Gabriel Bengtsson Oxenstierna. His mother was descen...

Desideria – queen from a distance

Desideria, Sweden's new queen, had always been at the very centre of world events. She now found life at the Swedish court dull. However,...

Read more
A witness of her time: Hedvig Elisabeth Charlotta

Throughout her adult life, Hedvig Elisabeth Charlotta found herself close to the centre of power. First as a duchess and the sister-in-la...